“I think it is very important the West collectively should work together to get over to that new government, be it by the Taliban or anybody else, that nobody wants Afghanistan, once again, to be a breeding ground for terror.” 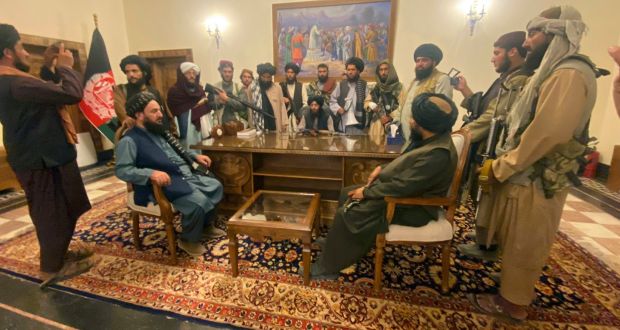 U.K. Defense Secretary Ben Wallace confirmed to told Sky News on Monday that it was not in the country’s plans to send troops back to Afghanistan.

In Italy, Foreign Affairs Minister Luigi di Maio shared a similar message, telling the newspaper Corriere Della Sera on Sunday that there would be no new military commitment to Afghanistan.

“Surely the West has made mistakes, and it is right to admit it,” Di Maio said, according to an NBC News translation of the interview.

“Over the past 20 years, attempts have been made to put a barrier to the power and ideology of the Taliban, but if the advance in recent days has been so fast and rapid, we must at least ask ourselves what the reasons are” he added.

EU foreign policy chief Josep Borrell tweeted Monday: “Afghanistan stands at a crossroad. Security and wellbeing of its citizens, as well as international security, are at play.” Borrell will discuss the situation with EU foreign affairs ministers on Tuesday.

Ireland’s Minister of Trade Leo Varadkar said: “Shocking news from Afghanistan. Particularly concerned for the women and girls of the country. Ireland will continue to use its voice on the UN Security Council to condemn Taliban violence and prevent further suffering.”

It’s a really grave matter, and hand and the entire world is shocked at the development. What comes next is pure horror and terror for the families in Afghanistan.